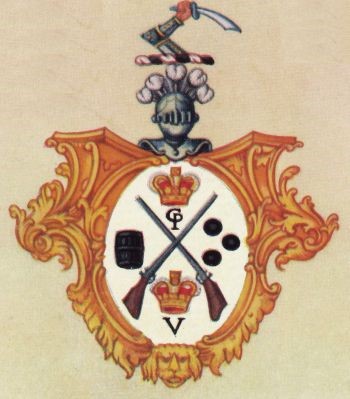 Apprenticeship (or servitude) – This meant that the individual had completed an apprenticeship with a master. During the years of service, he was bound to that master, but once he/she learned the trade, the contract could be broken, and the individual was given their freedom.

Patrimony – If a person’s father was a Freeman at the time of his/her birth, then that individual could gain his/her freedom.

Redemption or purchase – A person could be invited by the company to pay a fee ("fine") to become a Freeman.

The images can provide you with even further information about your ancestor such as his relationship to his master, exact date of admission, and full address.

These records provide lists of liverymen and registers of freedom admissions to the Worshipful Company of Gunmakers. You can view original pages from the company’s apprenticeship registers and livery lists. The Gunmaker’s Company is one of the City of London’s 110 livery companies. The leading twelve companies are known as the Great Twelve. Today, the Gunmakers’ Company is 73rd in order of precedence. It is one of the few City of London livery companies still carrying out the work for which it was founded. Like the rest of the livery company movement, the company has also evolved to include more social and charitable activities.

Early history of the Worshipful Company of Gunmakers, London, England

The Worshipful Company of Gunmakers was founded in 1637, after decades of arguments over which of the city’s livery companies would regulate the emerging trade of gunmaking. The first recorded use of gunpowder and cannons by an English army was at Crécy in 1346, as a sort of opening act for the longbows, but guns were not seen as an essential element of warfare until the defeat of the Spanish armada in 1588. Sound cannons and good tactics enabled the small, quick British fleet to cut a swath through the lumbering Spaniards. After that, the supply of guns became a matter of national importance.

In 1589, a group of gunmakers drew up draft procedures for proving the safety of firearms. But their efforts to form a new company for the regulation of this emerging trade immediately ran into opposition from existing companies, notably the blacksmiths and the armourers. After a generation of squabbling, a royal commission was created in 1631. On its recommendation, an independent gunmakers’ company was given a royal charter by Charles I on 14 March 1637; further bureaucratic opposition, plus the outbreak of the civil war, delayed enforcement of that charter until 1656.

The charter defined the role of the Gunmakers’ Company, which is still in effect today. It created a proof mark, a stamp of the letters ‘GP’ topped with the royal crown. The mark is stamped on guns that meet the company's safety requirements. Only the company can bestow it, and it is illegal to sell a gun without a recognised proof mark. To administer proof, the company was given broad ‘powers of search, gage, proof trial and marking of all manner of hand guns in London or … imported from foreign parts’ – including the power to search (with a constable) for unproved guns and seize them.

The company is unique in having always existed outside city bounds, possibly due to the noise and nuisance of its early (and now superceded) proof procedures. Proof is the compulsory testing of all newly assembled guns. It established its first Proof House in 1657, just outside the city walls, underneath a bulwark near Aldgate. But by the 1670s, the walls, bulwark, and proof house were crumbling. So in 1675, the company secured some land in a garden at Whitechapel, on what is now the Commercial Road. At 46-50 Commercial Road, it built a small compound which included the Proof House, where the actual work of testing barrels was done, the company’s livery hall, and, in earlier centuries at least, housing for the Proof Master. The livery hall at number 46 was sold in the 1920s, when the company thought it superfluous. It was repurchased in 2007, although it is currently rented out to commercial tenants.

Records of the Worshipful Company of Gunmakers are stored at the London Metropolitan Archives and begin in 1637. Registers of apprentice bindings and freedom admissions start from 1656. Other records include court minute books, correspondence, charter and ordinance book, papers relating to property, financial accounts, quarterage books, notices and reports concerning new and amended proof rules, papers relating to relevant Parliamentary legislation, Proof House ledgers and other papers, and papers relating to court cases.

About the City of London’s livery companies

In the City of London there are currently 110 livery companies, and the leading twelve companies are known as the Great Twelve. There are also three additional companies without livery. The older livery companies began as early medieval trade guilds, which were associations of merchants and craftsmen aimed at protecting and regulating their various trades. This they did by insisting on certain standards of material and craftsmanship; many also had a benevolent purpose and cared for their less fortunate members. Through the ages, the companies became influential in the government of the cCity of London and were also recognised as suitable bodies to which benefactors could entrust charitable monies.

Livery companies are so called because in the early fourteenth century many of them assumed distinctive dress, and Edward III was known to have been clothed in his livery when attending the Merchant Taylors’ Company events. The Butchers’ Company was known to have had a hall outside the city walls as early as 975 and there was a fraternity of Bakers in 1155; the Weavers' Company has the oldest known charter (1155).

The guilds whose members engaged in trade and overseas commerce or in luxury goods were of greater influence and standing than the others, and the present accepted order of precedence was laid down in 1516 for the forty-eight companies then in existence. There is a reference in the city records in 1376 to ‘Twelve Principal Mysteries’, and it is known that in the fourteenth century eight of today's Great Twelve companies provided 220 out of 235 city aldermen. Until the second half of the sixteenth century, it was required that aldermen should be members of the Great Twelve. Until 1742, Lord Mayors were also required to be members of the Great Twelve. Many new companies have been formed and some amalgamations have taken place since 1516.

The degree of involvement of companies with their respective trades or industries today varies considerably. The goldsmiths, fishmongers, vintners, glovers, stationers, and gunmakers, for example, still have considerable interest and influence in their respective trades, as do some of the more recently formed companies. Some companies have almost completely lost contact with their original trades, and their main work today comprises the administration of charitable trusts and involvement in city pageantry.